Welcome to my game mods portfolio!  Here is where you can see some of the material I have created as mods for various games.
Hello! Before you continue on with this page, let me share this with you. Your participation for this brief section is voluntary, so you can skip this section if you choose. Your involvement is very much appreciated should you take part in this brief offer.

All of the material here is provided for free and for educational purposes. When I am not blogging, I am trying to make content to my creative works studio, JMDesigns (you are here). Donations can help me to provide more content and even finance getting certain programs and licenses. Would you like to donate to support my creative work on ? Donations to JMDesigns are voluntary, but would be appreciated:

Having said that, enjoy the rest of this page! Thanks for your involvement (if you did so here)!

​Utilizing the gMotor engine that powers rFactor, GTR2 seems to offer a little extra to make it better than rFactor.  Namely its ability to have AI racing makes it wonderful.  I had bought this game earlier in January 2016 and haven't really played it until about May or June 2016.  I had in mind a vision to make a game video featuring GTR2.  The first attempt was with taking one mod and making a skin for it.  Then later, I attempted to take one car to come up with a One-Make racing series to serve as the primary project of my video project.  So what I did was come up with a livery for a mod for the 2009 Ford Focus RS Cup for GTR2.

EXTRA NOTE: I don't drink or smoke; and so with the liveries I present, I choose not to feature liveries of alcoholic beverages or tobacco.

DISCLAIMER: All vehicles and sponsors are all registered trademarks of each respective manufacturer and company.

My creations for GTR2 are featured here...

To start up trying to design cars in GTR2, I took a car from a popular online community called Trackaholics.  One of the cars I used was a Mercedes-Benz C63 AMG.  At the time, my skills weren't too great in coming up with solid car skins.  This still was a mark of progress... 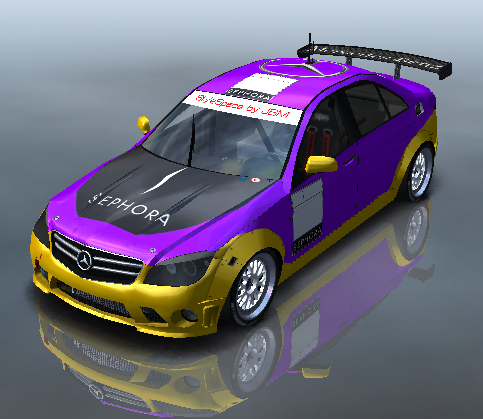 The car's livery was meant to be a template. The colored options include the main body of the car and the secondary color accents. So in this picture, the purple car color, the yellow secondary colors, and even the windshield banner could be adjusted. All cars bear the Mercedes-Benz logo and colors as well as the Sephora sponsorship on the hood/bonnet. By the way, this car is part of a GTR2 mod featuring the 2009 Mercedes-Benz C63 AMG.

Another Trackaholics car is the Ford Focus RS.  I designed one livery and later made another one.  Take a look at my skin creations: 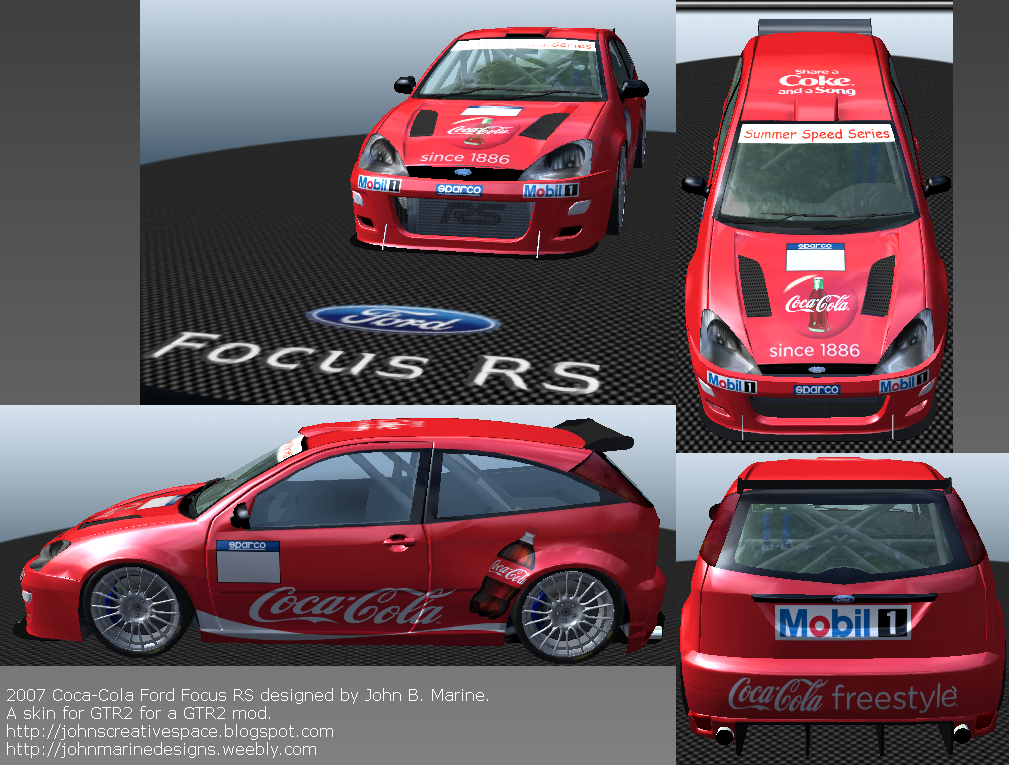 While not my first GTR2 skin, it was one of the first real liveries I created for any mod in GTR2. This car features Coca-Cola livery to coincide with a video project I was working on.
I made a video featuring this car.  To see my video, please take a look at this: Coca-Cola Summer Speed Series. 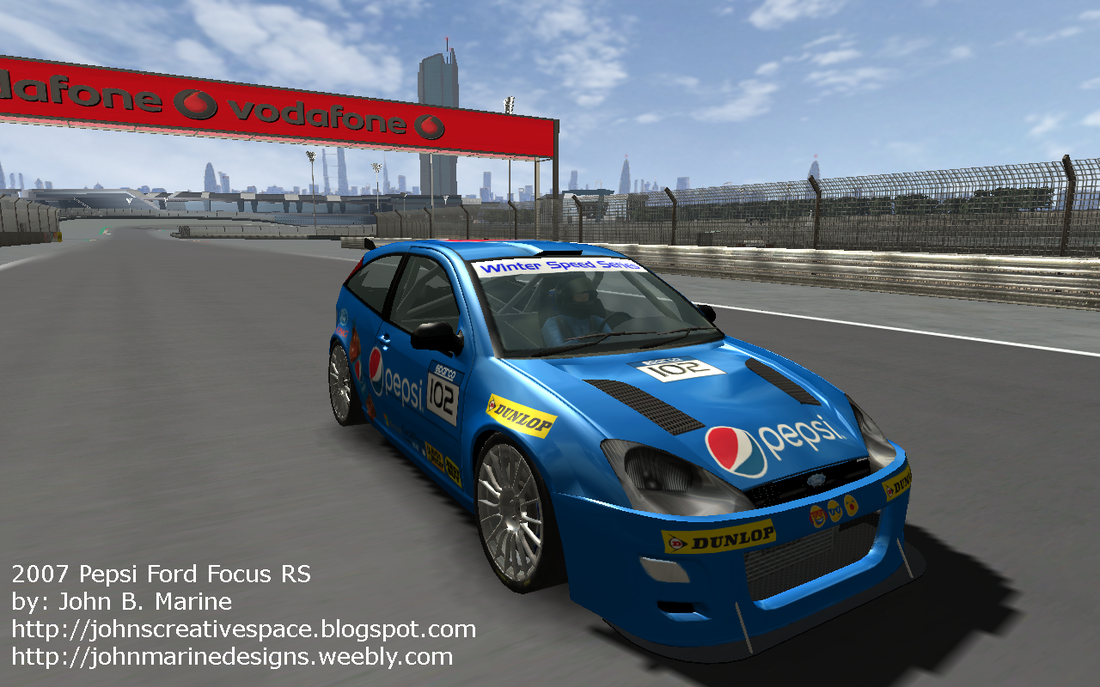 In addition to making one livery for the Ford Focus RS, I made a second car. This car is a spinoff of the Summer Speed Series, and it is called the Pepsi Winter Speed Series. The entire car is the same as the other model, only that this model is adorned in Pepsi colors rather than Coca-Cola.

I have always loved the Audi R8.  At the Houston Auto Show, I've seen the Audi R8 in person both in coupe form and in convertible form.  It is a fabulous car.  I decided to get creative and make my own livery for it.  In the past, I had a mod from an online community called the European Endurance Center (EEC) and used their GT3 mod.  Because I had too much trouble trying to get it to work, I instead looked for a different GT3 mod.  And so I found this FIA GT3 mod.  I took the template for one of the cars- an Audi R8, and made my own skin for it.  The end result of my work can be seen below:

This car is the Audi R8 LMS GT3 adorned in the blue and gold colors of my fictional motorsports team- Moonlight Motorsports. This car is part of a GTR2 mod called FIA GT3 2011. The car's primary sponsor is Samsung.

In my past of making car skins, I have never successfully made a skin for a formula race car or a prototype sportscar.  I took a GTR2 conversion of the Formula 3000 cars from RACE 07 and made this skin.  Take a look: 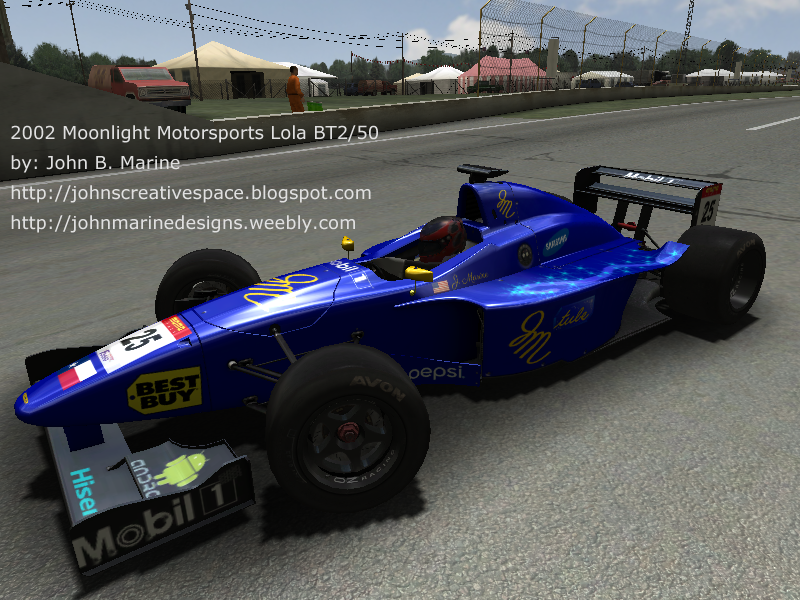 Previously, I have NEVER made a skin for an open-wheel car or any kind of formula racing car. That all changed as I modified this 2002 Lola BT2/50. These are the F3000 cars from the RACE series from SimBin.

The Ferrari F430 is a great looking car, and the F430 GT2 is a fine GT racing machine.  As a friend of mine on Facebook was wondering if I would come up with something to salute an online racing league, I decided to make something to salute this community.  So we talked as I wanted to gain some of the graphics to try to design a fairly decent car to support the community.  And in so, I came up with this: 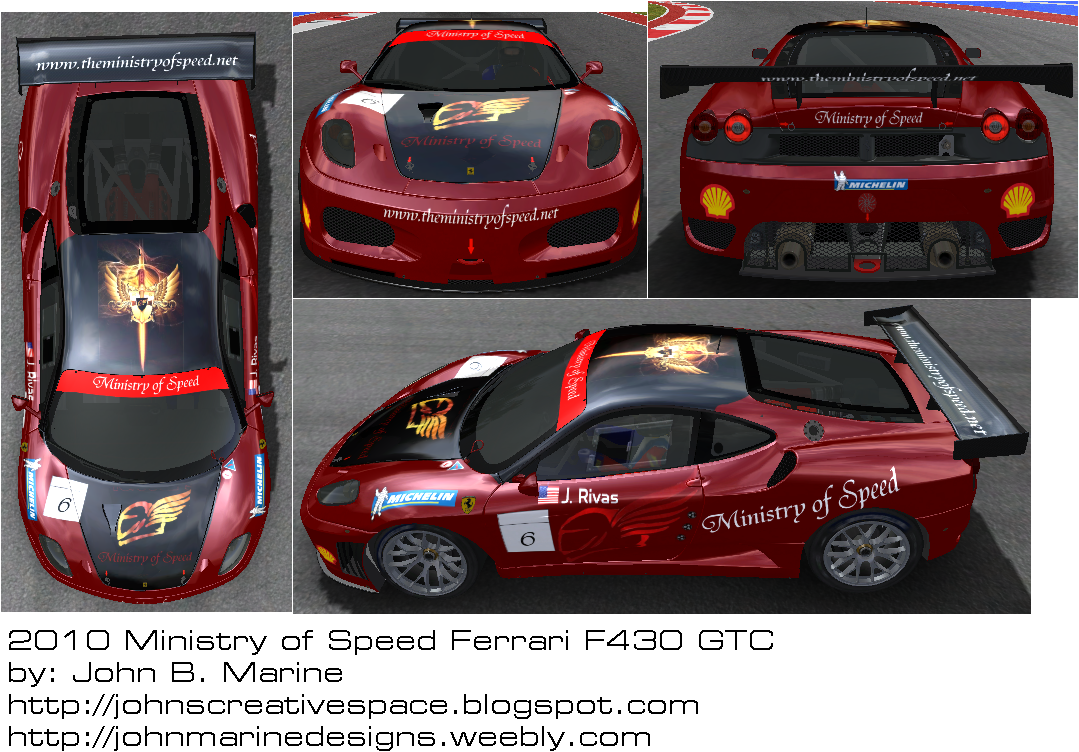 This car was designed in support of an online friend of mine. "Sixxgunjohnny" created the sim racing league, the Ministry of Speed (not to be confused with the Ministry of Sound, which I think is purely awesome, but that's beyond the point). The mod is from GTR2 and is the Ferrari F430 GTC mod. The track seen here is Circuit of the Americas (COTA).
For more information on the person's website I am making reference to, feel free to support my online friend by visiting the official site of the Ministry of Speed: www.theministryofspeed.net.

The Porsche Cayman S is a fine car.  When I found a mod for this car, I went ahead and looked for ways to make my own Cayman S skin.  There was a lot of trouble in my work.  I use a program called 3DSimEd to preview my liveries without having to load GTR2.  Sadly, I've had trouble trying to get the skins to load.  So I had to basically open GTR2 and take note of each of the different details I applied to the cars.  I eventually came up with designs that I liked and proudly shared in the image below:

Originally, I used a Saleen Mustang SE race car as my Pizza Hut race car. But since finding this fun-to-drive mod, this mod got me to designing a special Pizza Hut livery car. The car is designed as part of a One-Make Series I conceptualized using this car. The track in these pictures is Singapore GP 2008 for GTR2.
As an off-topic note, I recommend you buy 3DSimEd to get all of the features without having to be bogged down by the trial limitations.  It is a great tool to use to preview cars and tracks in a host of different racing games.

The SEAT Leon is a handsome hatchback.  The Spanish auto maker is the Spanish arm of the Volkswagen Audi Group.  I developed a set of cars as part of a GTR2 video project.  As you can see with the car below, this is part of a project called the "Xochitl Cup": 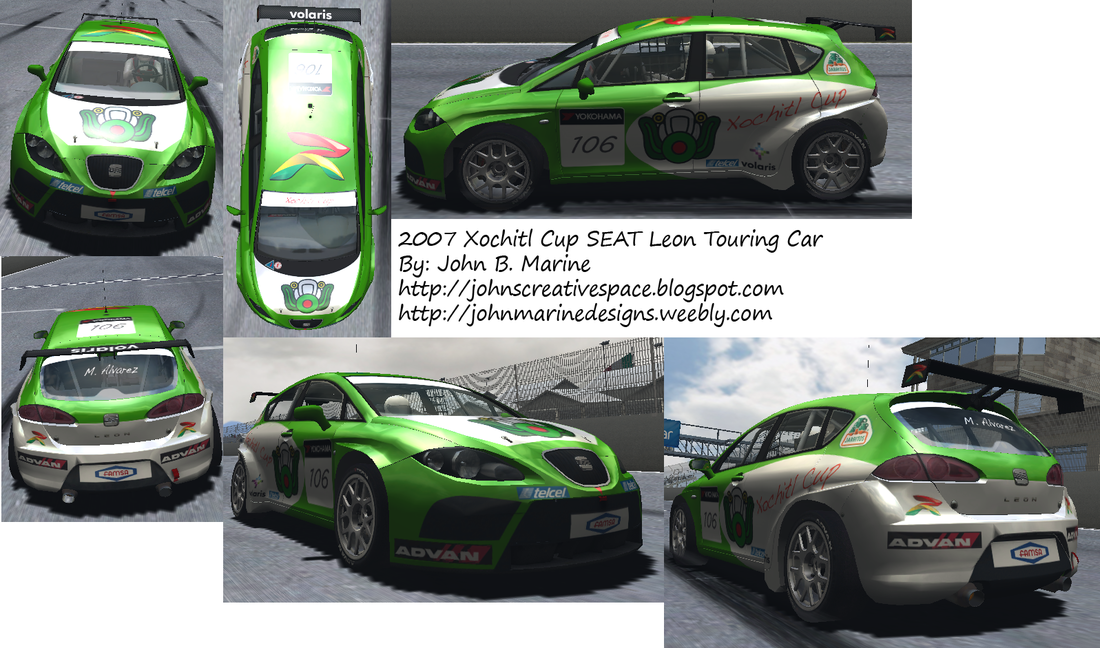 As part of a GTR2 project called the "Xochitl Cup" (pronounced "so-cheel"), this is a SEAT Leon touring car from 2007.
I had a lot of trouble trying to get results I was proud of.  I had to come up with image files for the windows and the driver.  The work was rather tedious, but I was happy with my results finally when I finally put together my GTR2 project.  By the way... this is a GTR2 conversion of cars from RACE07.

I was still a baby when this car had its time in the spotlight.  The Volvo 240 Turbo was one of many cars trying to assert itself in the World Touring Car Championship and even the European Touring Championship.  Someone converted cars from "Volvo: The Game" and made a GTR2 mod out of it.  After downloading templates for these cars, I went for the opportunity to try to make skins for this car.  For some reason, I was feeling like making some livery along the lines of '80s technology.  So I went ahead and tried making two minimalist liveries for it.  Take a look: 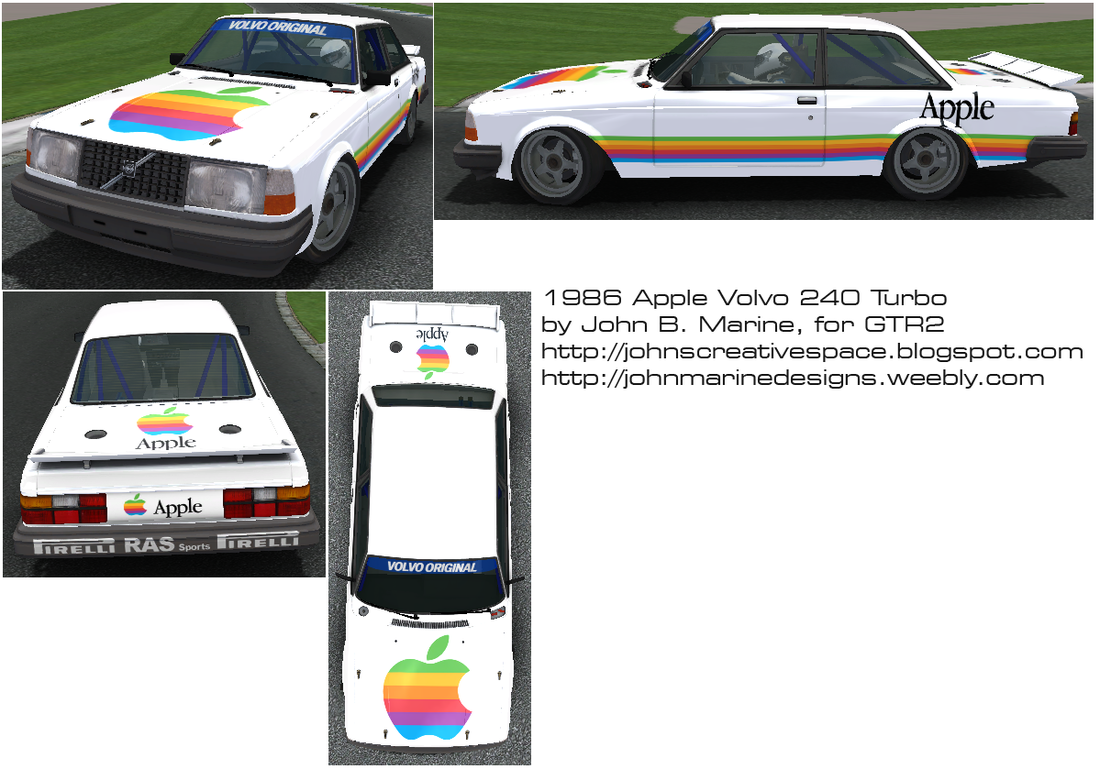 This is a 1986 Volvo 240 Turbo adorned in Apple colors. It was an attempt making a historically-accurate livery. 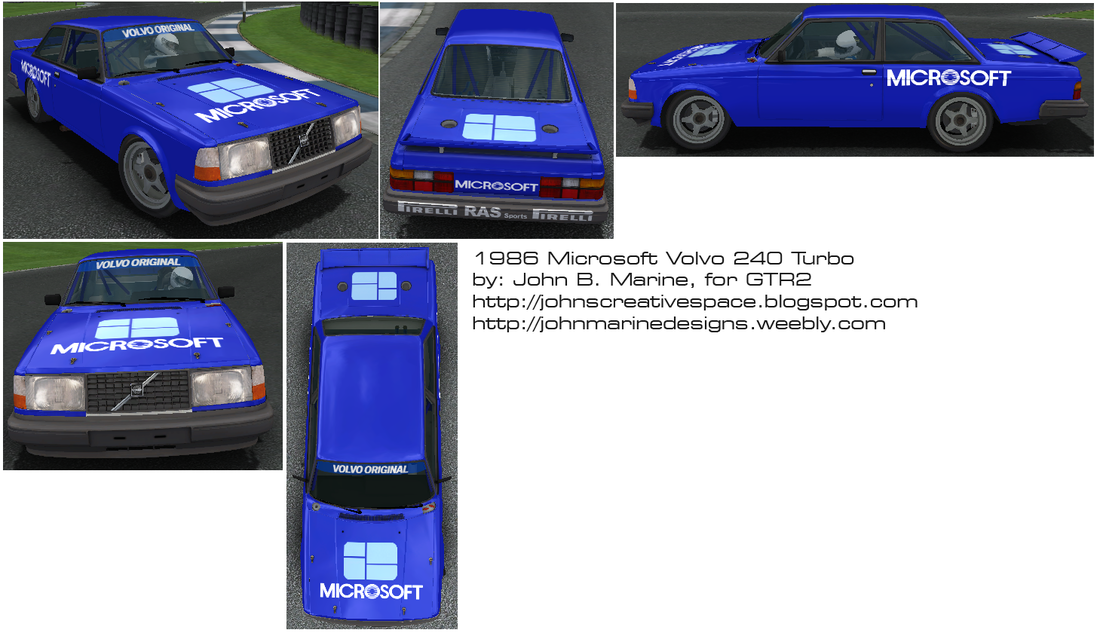 This was one of my other attempts at a minimalist racing livery. The car is a 1986 Volvo 240 Turbo with Microsoft livery. The Microsoft logo and Windows logos were about as accurate as they were in 1985.
I will have more material to share in future edits.  So make sure to Bookmark this site or something to keep up with the latest material.

Again- let me know if any of my designs interest you and that you would want to download.  Thank you for your cooperation!
Last call! Remember your participation for this brief section is voluntary, so you can skip this section if you choose. Your involvement is very much appreciated should you take part in this brief offer.

All of the material here is provided for free and for educational purposes. When I am not blogging, I am trying to make content to my creative works studio, JMDesigns (you are here). Donations can help me to provide more content and even finance getting certain programs and licenses. Would you like to donate to support my creative work on ? Donations to JMDesigns are voluntary, but would be appreciated:

Having said that, thank you for viewing this page! Thanks for your involvement (if you did so here)!
Powered by