Welcome to my art portfolio!  Here is where you can see some of the digital art pieces I've created

These are mostly random characters I created with MagicaVoxel.  They were mostly initially designed to be used in videos and possible games and apps.  I am providing my images here to showcase the various characters.

This is a random set of voxel characters I created designed with MagicaVoxel.

Though the body models are the same, the big change with this set are the featureless faces in this 2nd set of voxel characters.
(NOTE: My third voxel people set was to be featured here.  However, because of errors trying to get it featured here in this page, you can visit my creative works blog instead to see my 3rd Voxel People Set.  I apologize for any inconvenience.) 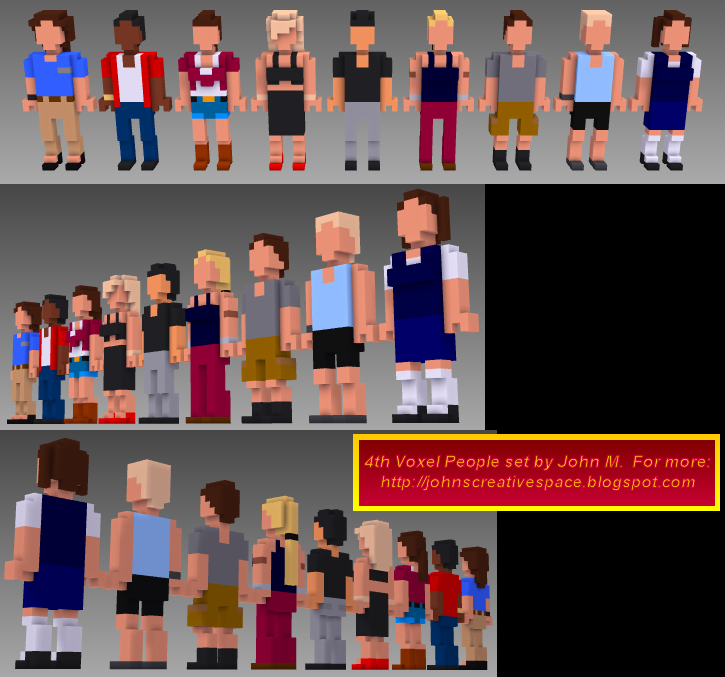 This was the fourth set of voxel characters I created. I tried to make characters with a little more personality in their design. 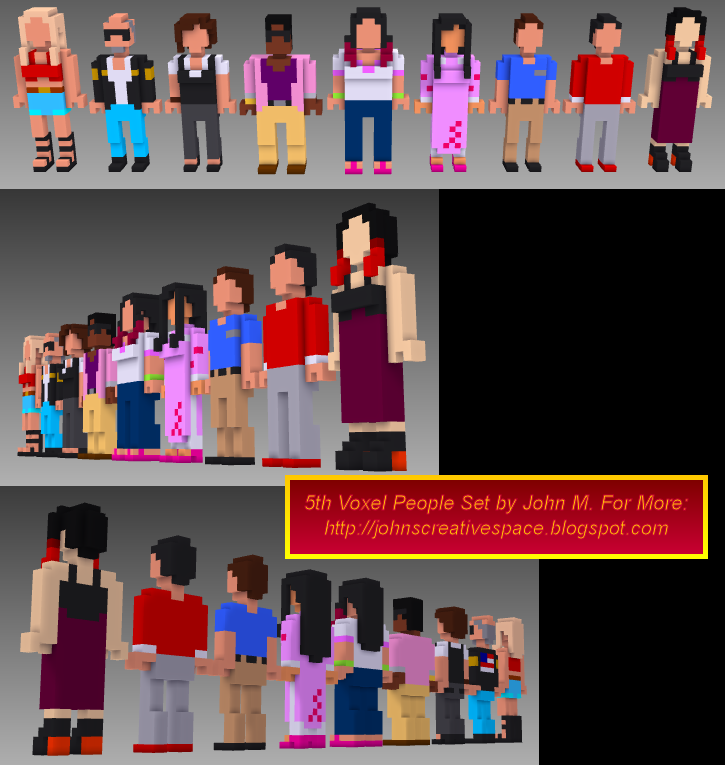 I tried a few more different methods to design characters while still using the same basic body model. This is my fifth set of my random characters. Also, note the wider-bodied characters with the male in the mauve blazer and the girl wearing the pink flip-flop/thong sandals.

This collection of images features a handful of characters I made for a fighting game that never materialized.  It was a 2D project, but I re-created many of the characters in 3D through voxels and through the means of the voxel engine MagicaVoxel.

To learn more about this series, visit my creative works blog regarding Top Diva. 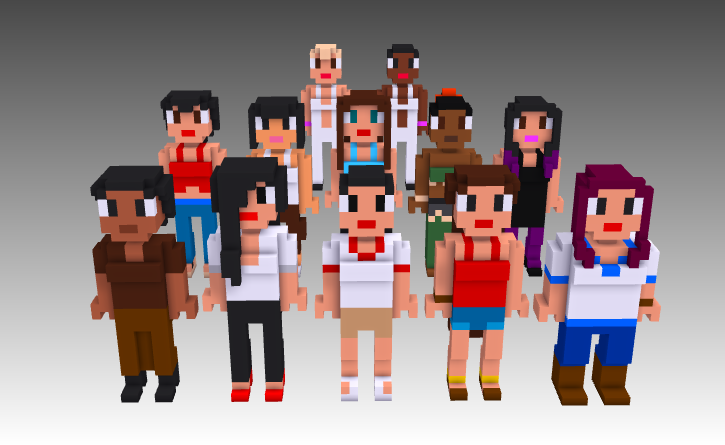 In addition to characters, I have also designed voxel vehicles.  Here is a collection I created in the below picture.  You can learn more about these vehicles by reading "My Voxel Vehicle Showcase" in my "John's Creative Space" blog. 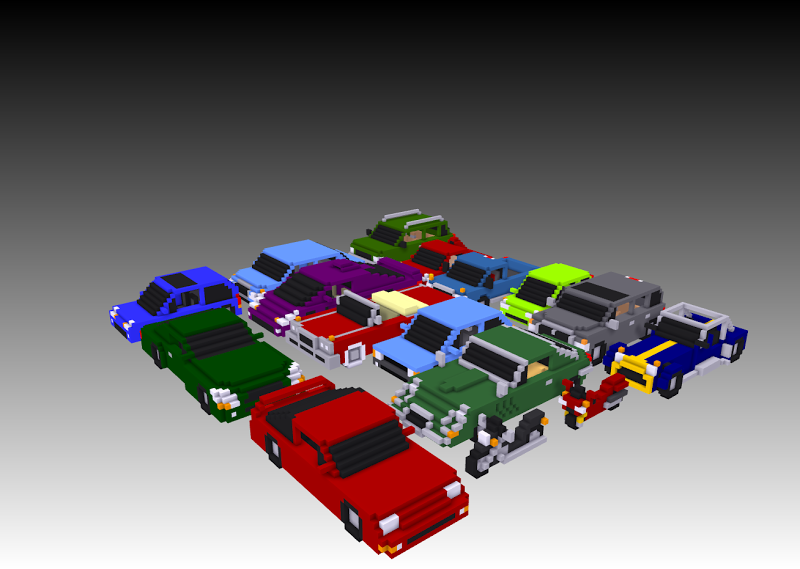 This picture features a collection of various voxel vehicles I have created using MagicaVoxel. 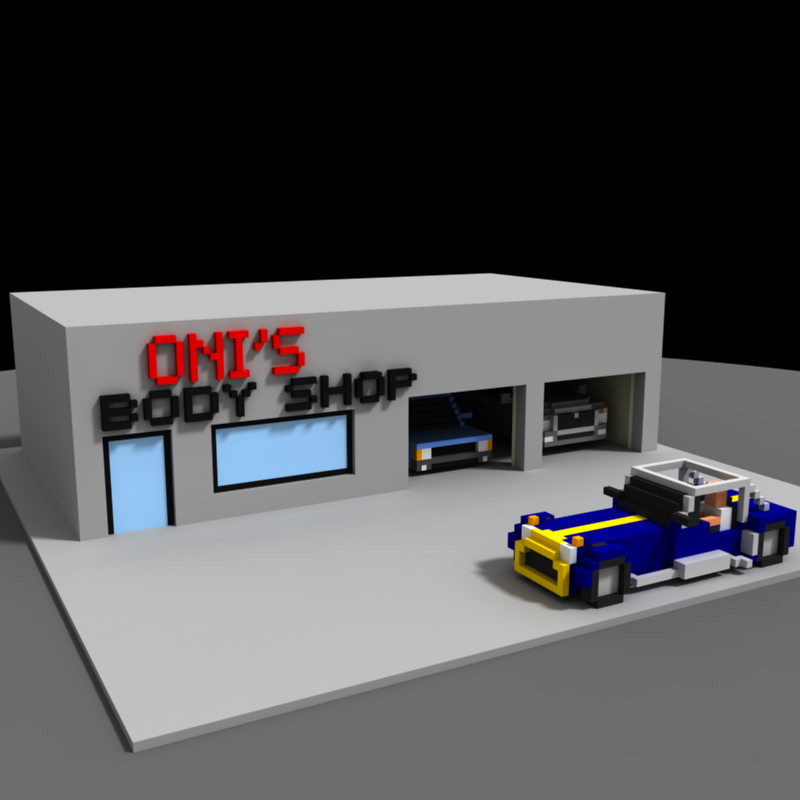 "Oni's Body Shop" is a scene I created using my voxel vehicle models. 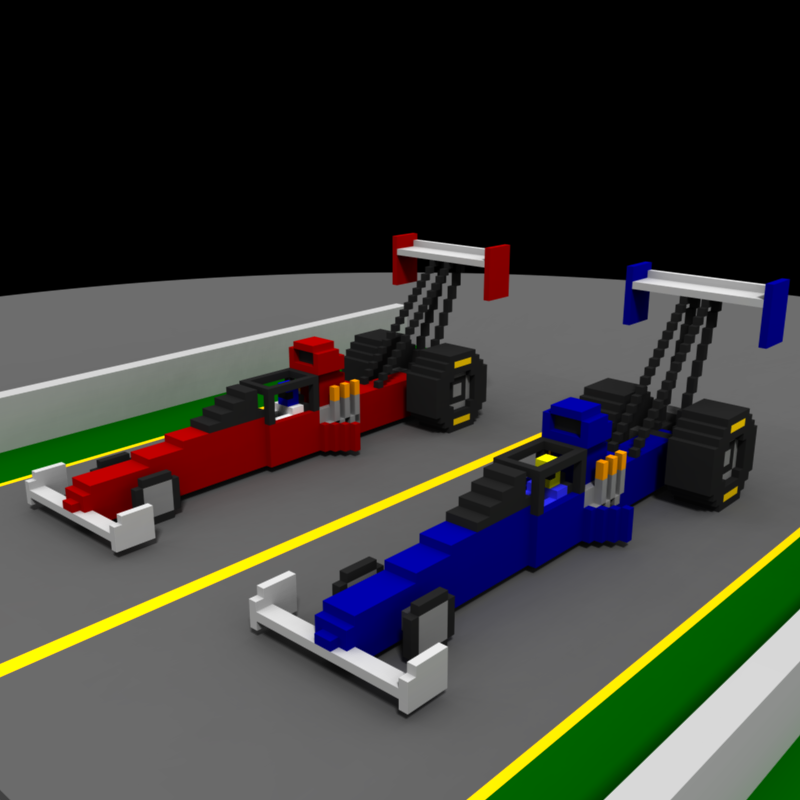 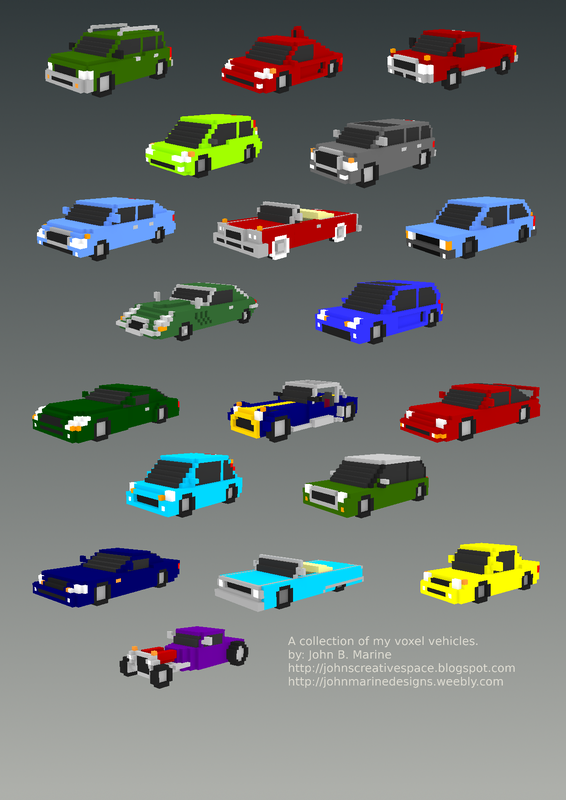 After almost five years since posting my first voxel vehicle, I finally decided to rework the vehicles some and offer them as a downloadable package. Click on the image to get my voxel vehicle pack!

By using the free program Inkscape, I have practiced making vector art.  Many other people use programs like Adobe Illustrator for vector art.  Vector art allows you to make precise-style art that retains its quality no matter how many times you resize it.  So when you zoom into vector art, you don't get the pixelated mess rasterized images provide.  Because I am not as experienced with vector art, I wanted to practice vector shapes and vector techniques.  So take a look at the images I created:

I took a picture of this high heel pump I found online and tried to trace it. I later took that vector image and filled in the individual vector shapes. What I ended up with is the image you seen on the right. 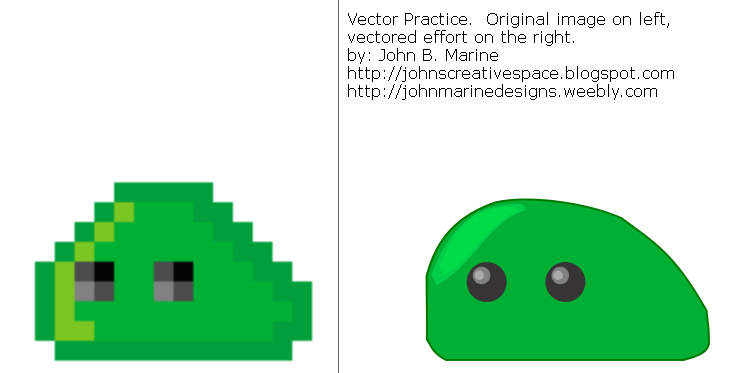 This exercise in vectoring was to take a pixelated image and make a vector out of it. Here, I practiced making multiple vector shapes to design a vector model. The image in question is a slime creature I created meant to be a game asset. 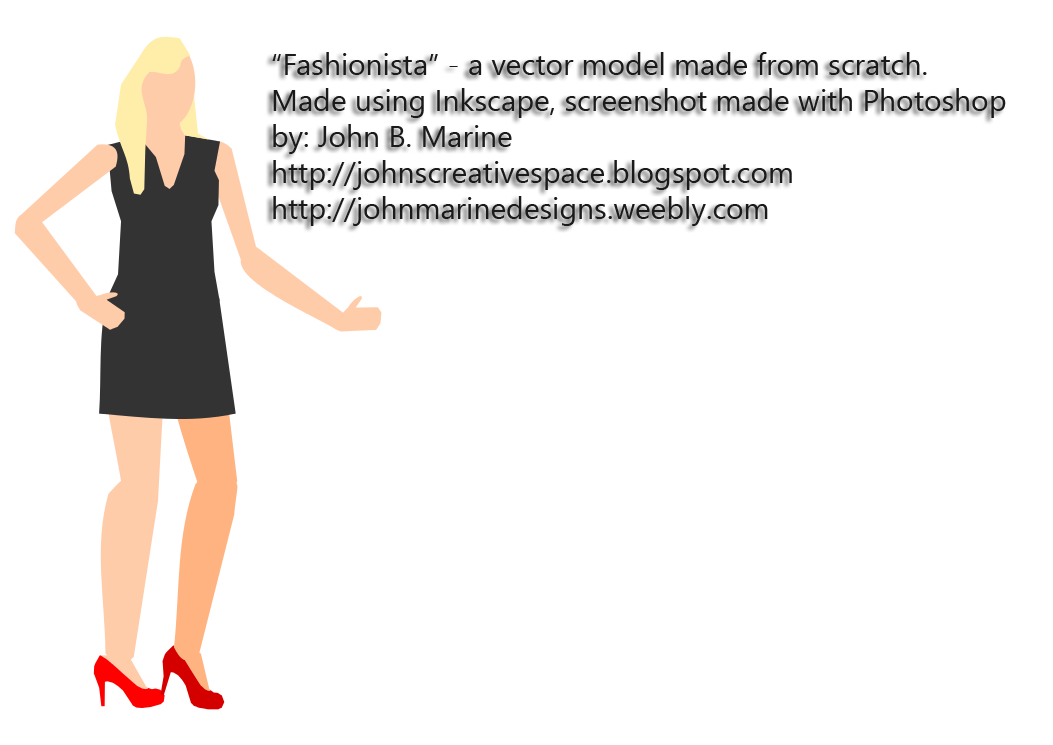 This is the first vector model I designed from scratch. The only thing I traced was the pumps on this vector lady. 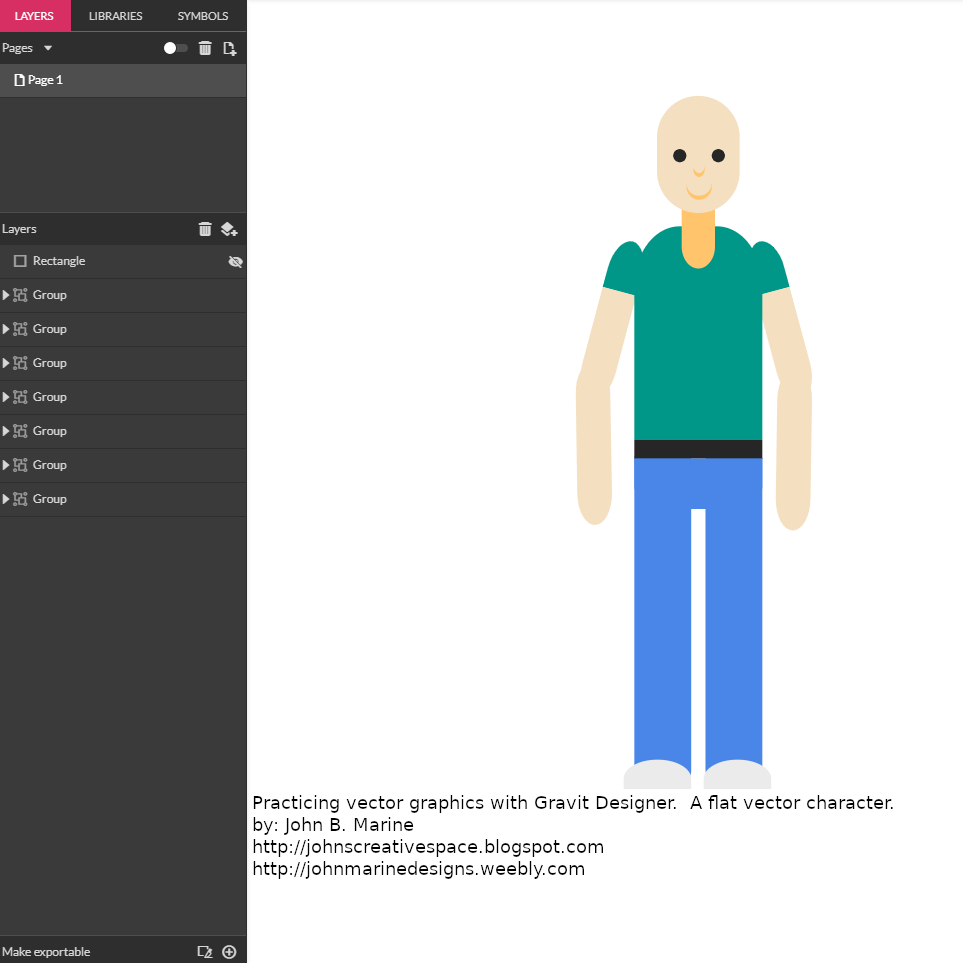 Using a free program called Gravit Designer, I practiced developing this flat vector character. It is merely for practice and not any serious character in development. 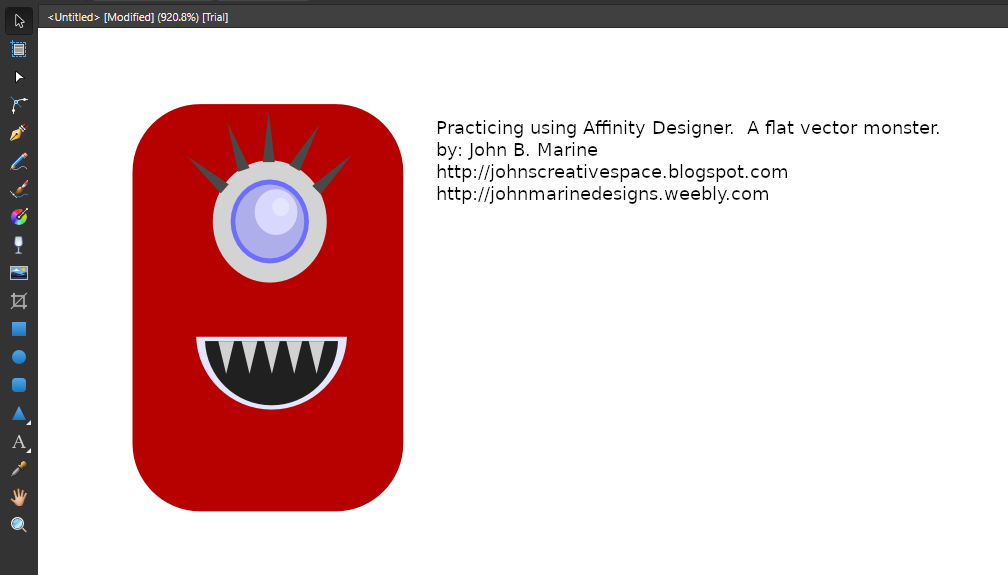 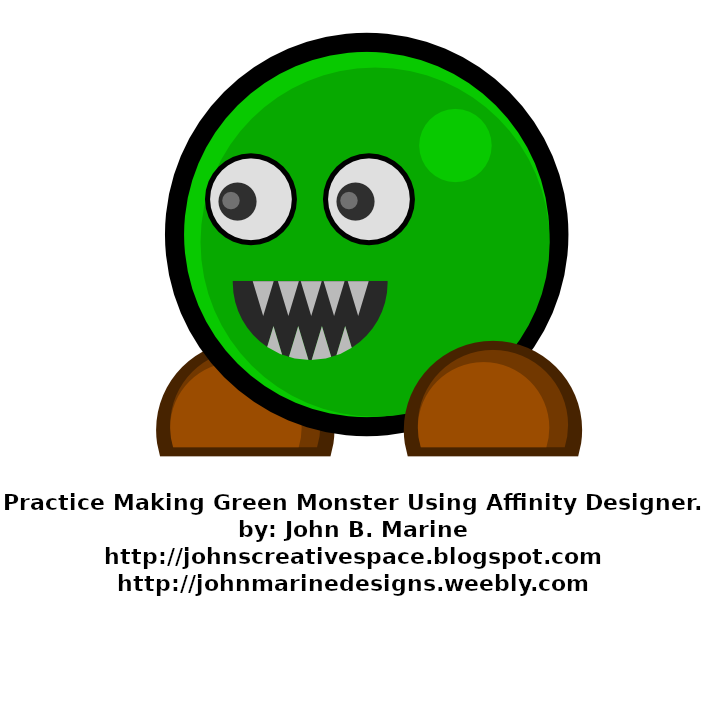 I attempted to make a better looking monster using Affinity Designer. That effort is what you see here with this green monster. 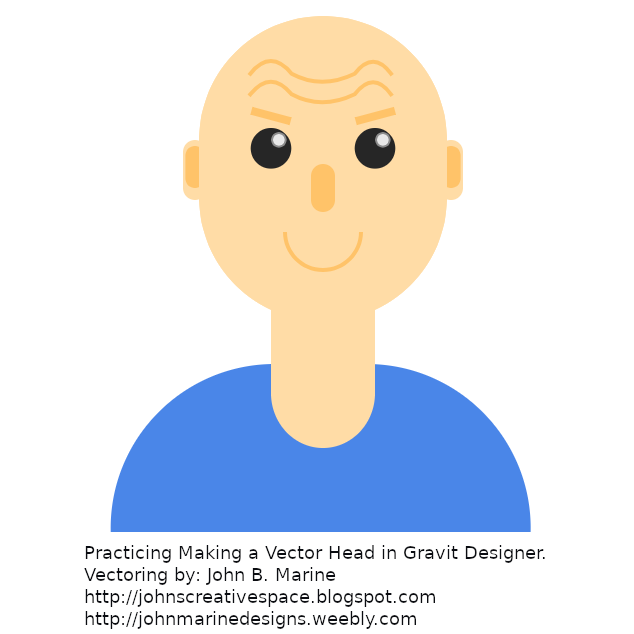 I tried to design a flat vector head and upper body. This was a practice attempt, but it could be the start of offering something more proper in the future. 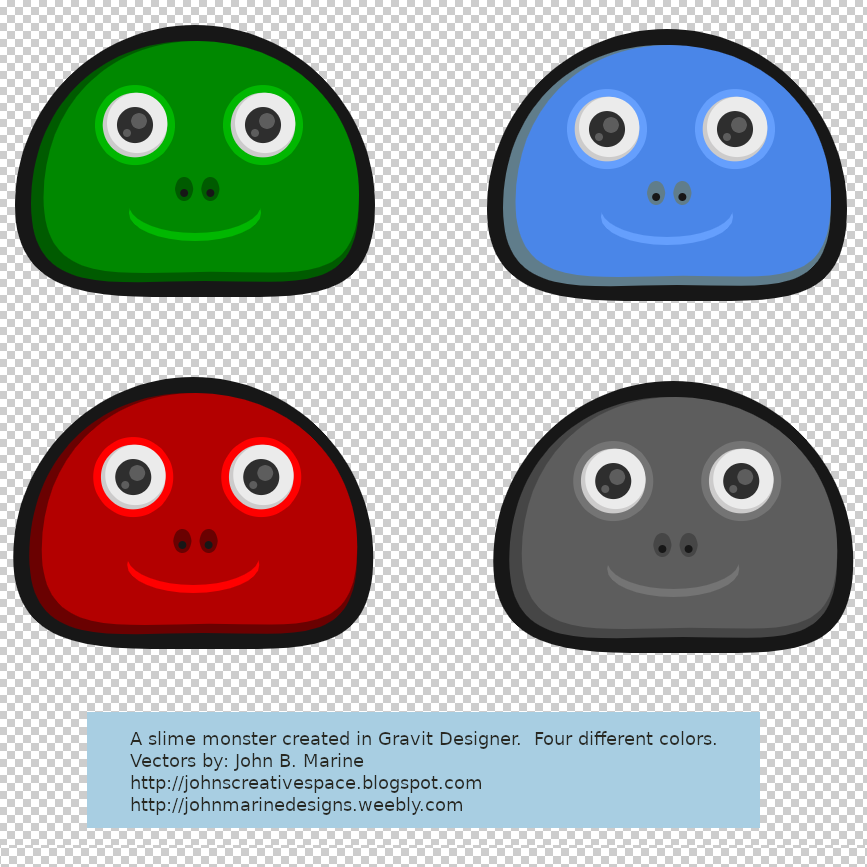 I made a slime creature here and colored it four ways. This was made in Gravit Designer.
Powered by